November 20, 2017
Possibly the greatest Christmas album ever released, A Motown Christmas was a package album originally released in 1973 as a 2 LP set. At the time, the record company sought to take advantage of its deep catalog by reissuing existing recordings and creating greatest hit albums. Just about every Motown act had recorded Christmas singles and albums, so the staff working on this compilation had numerous versions of each song to choose from and they chose wisely. We hear Stevie Wonder’s soulful, yet reverent version of Ave Maria, the Jackson 5ive’s youthful Frosty the Snowman and the amazing version of Rudolph the Red-Nosed Reindeer by the Temptations. There were also surprising finds like One Little Christmas Tree, stripped of elaborate orchestration and sung by Stevie Wonder. The arrangements used on these versions would become THE soul arrangements used when these standards were performed, even to this day. It might not be as famous as Phil Spector’s A Christmas Gift For You, but it was no less important. 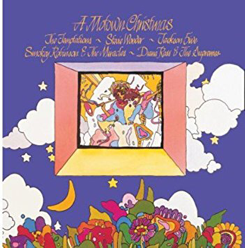